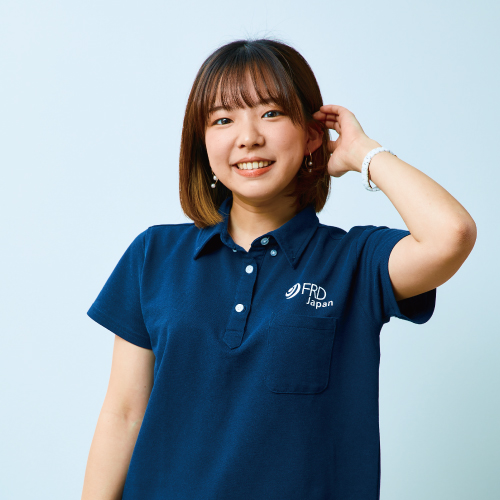 Previously, she worked for an analyzer manufacturer in the overseas sales department. She started looking for a new job because she wanted to work with the creatures she loves. That’s when she happened to find out about FRD Japan on Wantedly and went to talk to the company. After meeting with Sogo and Osaki, she felt the appeal and expectations of a Closed RAS system and decided to join the company.

From an analyzer manufacturer to an aquaculture venture. How I decided to change jobs and joined the company

As I majored in fishery science at university, I considered working in the fishery industry or the food industry. But, I couldn’t find much appeal, and the days of haze continued, probably because fish and animals are treated as “products” or “food, not as “living things”.

It was then that I happened to learn about FRD Japan on Wantedly. I had never thought about getting a job in aquaculture, but I was inspired by the fun of the business and went to hear the story. As I talked with Sogo and Osaki, I was first attracted because they were not just selling fish as a “product” but also raising them with love as living creatures. And above all, I felt the motivation (even though I hadn’t received a job offer yet) to make it a success for the grand business plan of the Closed RAS system, which no one had yet achieved.

Now that I have joined the company, I feel there is no better job than this one. I can be involved with the creatures I love and make a significant contribution to the earth and human society.

Changing jobs from a major company, but I didn't have any worries.

Of course, I thought about it a lot before I changed my job, but I had no worries about the company. When I met with Mr. Tokawa and Mr. Osaki, I heard that the company was still in the experimental stage and had not yet been commercialized. But for some reason, I felt confident that this company would surely succeed in its business. More than anything, I could feel their enthusiasm and passion for the company and its business. That made me want to follow them and work with them to succeed, so I decided to join the company.

The company's dream became my dream.

Before joining FRD Japan, I had always wanted to work with living things, but I didn’t have a clear “dream.” However, now that I have joined FRD Japan, I can confidently say that my dream is to grow the company and make the business a success. The more I learn about the industry, including the decline of natural resources, marine pollution caused by sea surface farming, and the salmon market in Japan, the more I realize the importance of the Closed RAS system. Because I have high hopes for this business, and I think OKASODACHI is truly delicious, my daily work is exciting and engaging.

No day is the same, which makes it all the more interesting!

I work in a wide range of fields such as sales, marketing, and public relations.

I feel that I am in an environment where I can fully utilize my curiosity and energy to be involved in a wide range of different jobs. For example, I can use the knowledge about our company that I have gained through PR activities in business negotiations. That allows me to repeat the input and output. It is fascinating to not only take over someone else’s work but also to develop a variety of work through trial and error. I can challenge what I want to do, even if it is my first trial. So, I can work with a sense of responsibility, which leads to my growth.

Of course, it’s not easy to explain a business that has no precedent and to launch a product for which there is no market yet. Naturally, people have questions such as “Will it really go well?” “Will it truly taste good?” That’s why every step forward brings me great joy and satisfaction.
Why don’t you take advantage of your passion and expertise and work together to achieve a world first?

"We open up the potential of aquaculture."
FRD Japan is looking for human resources to challenge together

Go to the entry site